KONTAKT   |   SITEMAP   |     NYHEDSBREV
You are at: Home » Analyser & Rapporter » Report: Who Cares about Free Speech? – Findings From a Global Survey of Free Speech
By Jacob Mchangama on 7. juni, 2021 Analyser, Frihedsrettigheder, Frihedens Fremtid

For immediate release: A new survey reveals that most people and nations strongly support free speech in principle but have reservations in practice.

A global survey “Who Cares about Free Speech?” has been conducted by YouGov for the legal think tank Justitia, which asks citizens in 33 countries questions about their attitude towards free speech in principle and testing their attitude when confronted with controversial speech and trade-offs.

Support for the principle of free speech is very high, averaging around 90 percent in all countries, but it drops substantially when put to the test against supposedly competing values such as statements offensive to religion and minority groups or statements disclosing information that could destabilize the national economy.

To assess the actual support for free speech in a country, the survey includes a composite measure, the Justitia Free Speech Index, based on answers to eight “tough” questions. The top scorer is Norway with 80 points average approval on all eight questions while Pakistan is at the bottom with only 38 points.

The findings in “Who Cares about Free Speech?” indicate that Scandinavians and Americans are most supportive of free speech while citizens in Latin America, other parts of Europe, Australia, Israel, and the East Asian democracies (Japan, South Korea, and Taiwan) also show relatively strong support. Meanwhile, support for free speech is weaker in Russia, Turkey, other parts of Asia, and Africa. Egypt, Kenya, Pakistan, Malaysia, and Tunisia receive the lowest scores on the Justitia Free Speech index.

Jacob Mchangama, director of the legal think tank Justitia, says of the findings:

“The survey is a stark reminder that, even though the principle of free speech is very widely accepted, we’ve yet to develop a truly robust culture of free speech at the global level. Even nations with very strong free speech traditions such as the Scandinavian countries and the United States enjoy far from universal support for controversial speech.

Given that free speech is essential for democracy, freedom, and human flourishing, it is encouraging that more than 90 percent of the global population supports free speech in principle. But once people are forced to measure their support of the value of free speech in the abstract against trade-offs and supposedly competing values, the near universal support plummets, and big differences in attitudes emerge.

These differences have very real consequences since they drive and legitimize the suppression of political dissent and the persecution of religious and sexual minorities and help consolidate the global development towards increasing authoritarianism. In an increasingly digital world in which global platforms cater to billions of people, the tolerance gap also risks fueling a race to the bottom in which the lowest common denominator becomes the bar for permissible speech as policed by unaccountable private tech companies with little transparency.

Unless we develop a more tolerant attitude towards ideas that clash with deeply-held values, there is a risk that the ongoing free speech recession, which has affected the right to speak truth to power in authoritarian states, liberal democracies, and private social media platforms, will only be perpetuated.  As George Orwell so succinctly put it, if free speech means anything, it is the right to tell people what they do not want to hear.”

The survey has been conducted by YouGov in February 2021. It is part of the Future of Free Speech project, which is a collaboration between Copenhagen based judicial think tank Justitia, Columbia University’s Global Freedom of Expression and two academic experts, Svend-Erik Skaaning and Suthan Krishnarajan, from Aarhus University.

Major findings from the report: 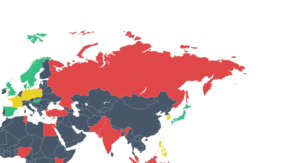